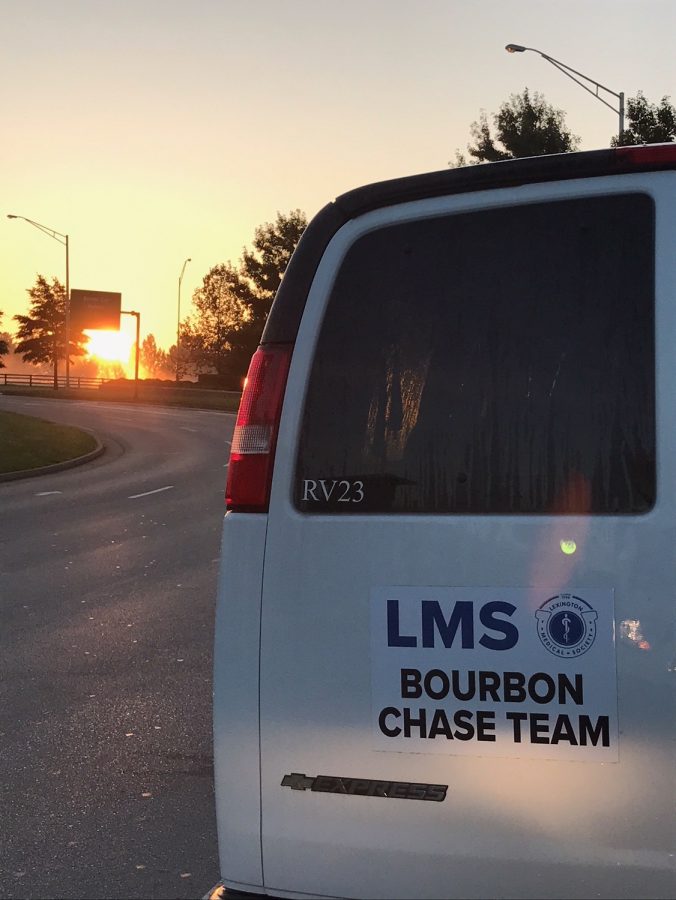 It’s about 9:15 p.m. on a comfortable Friday night in Danville, Kentucky and the downtown is booming with night life and a party atmosphere. Music is blaring from concert-sized speakers and there are hundreds of festive people dressed not for a night on the town, but for night running operations.

Former LMS President, Farhad Karim, MD, wearing his reflective vest and a head band with a white light in the front and red in the back, running down Main Street at a brisk pace and enters the chute to handoff the GPS tracking wrist band to Kenneth “Tad” Hughes, MD. The moment is met with cheering from the crowd as the Dr. Karim is handed a refreshing bottle of water while Dr. Hughes runs off into the darkness of the night. The team has completed 71.8 miles of the 203 mile relay race.

The Bourbon Chase, which took place October 13-14, is a Ragnar running relay race of over 400 teams on open roads that started from the Jim Beam Distillery in Clermont on Friday morning and goes to Maker’s Mark Distillery in Loretto, east to Danville, then takes a southern loop to Stanford, back to Danville, north to Harrodsburg, up to Four Roses Distillery near Lawrenceburg, east to Woodford Reserve near Versailles, east across beautiful horse country along Frankfort Pike through Midway, then finishing off on the Legacy Trail into downtown Lexington on Saturday evening. It is over 32 hours of continuous running.

The Lexington Medical Society, for the first time, fielded a Bourbon Chase Team in order to raise funds for the American Cancer Society. The team raised $6,226, surpassing its $6,000 goal thanks to our generous donors and support from LMS. The team, consisting of six physicians and four U.K. medical students reflected the demographics of our Society. We had male and female runners ranging in ages from early 20s to 70. The team included active physicians, a resident, and medical students. Our runners were split between two vans which leapfrogged across the Bluegrass with one van actively running while the other van rested and positioned about 30 miles forward to prepare to take over running. Running in van 1 was Neil Armstrong, MD, Kenneth “Tad” Hughes, MD, Greg Monohan, MD, resident Kristine Song, MD, and medical students Molly Sullivan and Sarah Bugg. Running in van 2 was Farhad Karim, MD, Mamata Majmundar, MD, medical students Megan Stout and Abby Bray, and I.

The Bourbon Chase, for our team, seemed to capture a lot of what the Lexington Medical Society has focused on in the last few years in terms of physician wellness, mentorship, support for our members in training, and supporting a higher purpose.

“The Organization of our team,” according to van 2 runner Dr. Majmundar, “Was a great opportunity for physicians, residents, and medical students to connect with one another outside the workplace engaging as a team working towards a unified goal. This offered mentorship, camaraderie, and in many ways incorporating lessons on perseverance, resilience, nutrition, fitness, mindset and behavior adaptability. We were able to share our journey in medicine, offer guidance on residency, work/life balance, and promote a culture of wellness. This was a wonderful experience.”

Dr. Hughes reflected similar sentiment, “It was really special to be with a group of doctors, residents, and medical students from different specialties and age ranges. Some I knew before and got to know better; others, I was getting to know for the first time. We shared our running experiences and had plenty of time to talk about our memories of medical school and residency with the younger folks that are just starting their career. In a way, the Bourbon Chase is a microcosm of our medical journey in that it puts people together for a common goal that tests you physically and mentally and yet is rewarding along the way. Also, it was good to know that our efforts were for a good cause: the American Cancer Society.”

Dr. Armstrong joined the team in the last week after we had a runner drop due to work requirements. “Being a very late addition to the LMS Bourbon Chase Team had its advantages. It meant that I did not have to worry about the deprivations of sleep, hygiene, food, and more. It is difficult to fathom all the reported merriment amidst these hardships. I’m happy to report that my skepticism was completely mistaken. The execution of the mission to run 200 miles in 30 hours with new found friends and colleagues is a highlight at the intersection of my professional and athletic life. The chase was equal parts medical call team, road trip, and marathon. Two young docs had the chutzpaz to run this as their first race…ever. I am grateful that there was a spot available and was accepted with minimal hazing.”

One scene I won’t forget was the afternoon of October 13th at Maker’s Mark Distillery. Van 2, parked among hundreds of vans, was waiting to take over running responsibilities from van 1. Medical students Megan Stout and Abby Bray, dressed in their running gear, were sitting on the grass in the shade of the van studying their notes for school. It made me think of the discipline and intellectual vigor that it takes to become a physician while at the same time realizing the importance of physical fitness for a healthy life style.

Let me know if you are up to the challenge and the fun to run on the team next October (tentatively set for Oct. 12-13, 2018). Once again, our team thanks our many donors who contributed towards our goal to support the American Cancer Society and its mission to fight cancer. Click here to watch a short video of the event!